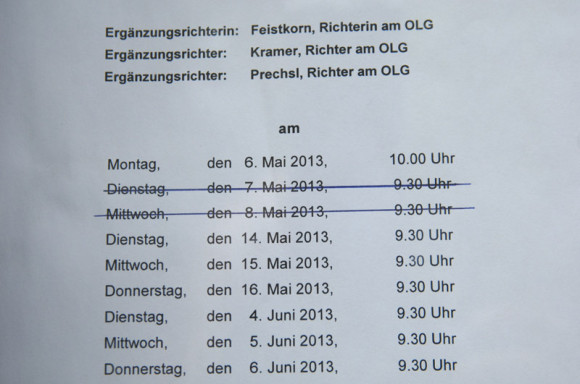 In front of the entrance of the High Regional Court demonstrators demanded unconditional clarification on the NSU series of murders and criticized the involvement of the Intelligence Service and the Police Authorities in the Neo-Nazi Scene.
In her press conference the Attorney General argued against this sentiment saying: “Our investigations have revealed no indications at all that government agencies may have been involved in the crimes of the NSU.”
For the last few days, an Altenburger Neo-Nazi had called on The (Neo-Nazi) Scene to visit the Munich trial. His call was only answered by a few followers, including the convicted right-wing terrorist Karl-Heinz Statzberger (Kameradschaft Munich) and Maik E., the brother of the accused André E. Already at the beginning of the trail day both Neo-Nazis stood in the waiting line, they then arrived in the hall in the early afternoon. Their appearance in the visitor’s gallery worried and astonished visitors and those involved with the trial. Can it be ruled out that Mike E. will be called into consideration as a witness in future proceedings?
The long list of scandals and inaction by the authorities in uncovering the series of murders of the NSU is increasingly taken up by conspiracy theorists. Individual representatives stood in front of the courthouse trying to provoke and attract the media’s attention.

The Defense Delays the Start

The trial began with a half hour delay. There was a reading of the indictment that was not at the first trial session. At the beginning of the trial the lawyers of Beate Zschäpe presented a motion accusing the presiding judge of being biased. Additionally the lawyer for Ralf Wohlleben made a motion to replace the Senate. The court had denied advocate of the Berlin Scene, Wolfram Narath, association with the defense. The defense also sited the seizure of letters as another reason for the bias of the court. In them Wohlleben had turned letters into Swastikas, Wohlleben’s lawyer Olaf Klemke trivialized this as “calligraphy.” With his challenge on the grounds of bias the council for the defense set up his argumentation as one of delay tactics and then, for two hours, quoted earlier statements and court rulings.
The court adjourned the trial until next week in order to make a decision on the claims of bias. Several representatives of the co-plaintiffs in ancillary suits described the new delay in the trial as catastrophic for their clients. They must now leave Munich again before the trial has rightly begun. Other representatives in the ancillary suits held that the postponement was not at all comprehensible and legally unusual. The defense for Beate Zschäpes announced other motions before the reading of the indictment.
An exact record of the day’s hearing to follow!