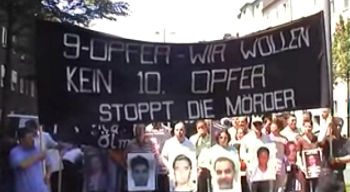 Summary of Political, Social and Legal Aspects of the Case Against the National Socialist Underground (NSU) – as at July 3rd, 2018

Since May 6th, 2013, five defendants have been standing trial before the Munich Court of Appeals [3]. They are accused in connection with crimes committed by the neo-Nazi terrorist organization “National Socialist Underground” (NSU). The main defendant, Beate Zschäpe, faces life imprisonment and the other defendants sentences of up to 10 to 15 years. More than 95 family members of victims or the victims of the NSU crimes have joined the proceedings as private accessory prosecutors. Almost 600 witnesses have been heard during the trial[4]. The closing arguments of all the parties to the proceedings – prosecution, defense and lawyers for the victims – took almost the whole of last year. On July 3rd, 2018 four of the five defendants used their procedural to address the court directly. Barring the unexpected, the judgment is set for July 11th, 2018. The judgment will include the verdict, the court’s finding of guilty or not guilty, and sentencing. The grounds for the judgment will be given orally by the presiding judge, Manfred Götzl, and will take about a whole trial day. The much longer written judgment will be issued later. This can take many months or even over a year to complete. The defense, the federal public prosecutor, and the private accessory counsel – in the event of a partial acquittal – have one week after the oral delivery of the judgment to file their appeal if they wish to do so. The legal grounds for the appeal have to be filed after the written judgment has been delivered. The judgment will only be reversed by the Federal Court of Justice if it finds that the trial court has made mistakes in applying the law or procedural errors during the trial. Even though the defense has asked for the acquittal of three of the five defendants, it seems most likely that they will be found guilty on all counts.

On July 11th, the day of judgment, there will be a demonstration in Munich called “Kein Schlussstrich” [5] as well as local demonstrations across Germany demanding that light continue to be shed on the NSU complex even after the judgment.

2. Crimes of the neo-Nazi Terror Organization NSU
a) Crimes committed by the NSU
b) A short historical background of the radicalization of NSU members and supporters

4. Reactions to the discovery of the neo-Nazi terror cell in 2011 and the following years
a) Society and media
b) Political reactions
c) Resignations in the aftermath of the discovery of the NSU
d) Parliamentary inquiry committees
e) Disciplinary measures and criminal investigations against civil servants
f) NSU: no discursive event

The German neo-Nazi terrorist organization, the National Socialist Underground (NSU) committed ten murders, three bomb attacks, and 15 bank robberies in the years between 1998 and 2011. They did not claim responsibility for their crimes and were not discovered by law enforcement until November 4th, 2011.

The so-called NSU complex has been called one of the biggest “failures” of German law enforcement and secret services by politicians and the mainstream media. These failures were allegedly caused by individual “mistakes” and a lack of coordination and competition between the responsible authorities [7].

From a progressive perspective, the NSU complex is an unprecedented example of the close connection [8] between the secret services and the neo-Nazi movement, as well as structural racism within the law enforcement authorities.