Representatives of co-plaintiffs at the NSU trial criticize the final report by the Bundestag Commission of Inquiry as inconsistent. 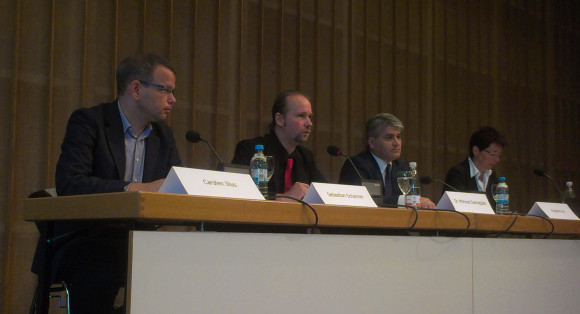 „You mustn’t make the mistake of evaluating things from today’s perspective. At the time, we didn’t have any indication of a xenophobic background”, retired Kriminaloberrat (senior police councillor) Wilfling explained on 11 July 2013 when testifying at the trial against Beate Zschäpe et al. before the Higher Regional Court of Munich. “Now don’t pretend there‘s no Turkish drug mafia.”

Wilfling has many years of experience as a murder investigator in Munich. He has published books on his work and would never see himself as a racist. And yet, his testimony illustrates the problem: The disastrous failure of the investigating authorities to clear up the crimes of the NSU is not the sum of individual mistakes. The fault lies in the system. Prejudices are not being challenged. “Foreigners” must have been murdered by “foreigners”. Factual circumstances are self-evidently to be found in the realm of organized crime.

At the same time, the investigating authorities clearly cannot be accused of a lack of commitment. Hundreds of witnesses were interrogated, even in Turkey; detection dogs were used; fake kebab shops were opened up; undercover investigators purported to be journalists; tax labels on cigarette packs were examined; and even a fortuneteller was consulted. For eleven years, hundreds of investigators were on the wrong track. All those witnesses, analyses, and pieces of evidence that pointed towards racially motivated attacks were consistently ignored.
The final report of the Bundestag commission of inquiry on this matter is published today. The crucial problem itself, however, is not being named in the common judgement:

Irrespective of the personal attitudes and intentions of individual officers, the investigating authorities follow inner logics, norms and values, and the racist consequences of which have come to light inter alia in the investigations of the series of murders and attacks committed by the NSU.

Highly praised for the representatives’ cross-party commitment, it is the Bundestag commission of inquiry of all institutions that has not succeeded, at a time of electoral campaign, in naming the problem as it presents itself to us. We are lawyers and representatives of co-plaintiffs in the so-called NSU trial before the Higher Regional Court of Munich. We have read the files. We have heard witnesses. First and foremost, however, we have learnt from our clients how they themselves were to be in the focus of the investigations for years after the crimes had been committed.

1. Surviving dependants and those injured in the attacks demand that it be recognized, also by political actors, that the systematic failure of the investigating authorities is based on institutional racism. The problem has to be clearly named; anything else would be window dressing. The murders could have been prevented.

2. We demand that the commission of inquiry be re-established in the next parliamentary term. The complete clarification of the crimes of the NSU, and of the possible involvement of investigating authorities and of the German intelligence service (the Federal Office for the Protection of the Constitution), is far from finished.

3. With regard to every violent crime, it should be required in the future to include, at an early point of time and in a reasoned manner, a specific note in the files if the investigating authorities are of the opinion that a racist or neo-Nazi motivation can be ruled out.

4. We demand training and constant qualification of all police officers that counteracts institutional as well as individual racism. Further, well-trained departments at state polices with expertise on the neo-Nazi scene, which should specifically deal with right-wing violence and substitute more generally-oriented departments for “crimes against the state”, should be set up and staffed. These investigating teams would mandatorily have to be involved in investigations whenever a right-wing background cannot be ruled out.

5. Departments have to be set up at the public prosecutor’s office that would be specifically competent and trained to deal with right-wing acts of violence. Departments that are generally responsible for “politically motivated” acts, or even additionally for offenses by and against police officers, are certainly not adequate in this regard.

6. More efforts have to be made to ensure that police officers with a migration background will also be recruited for leading positions. As this goal has apparently not been reached so far, a firm quota should be fixed for the time being. Racist tendencies within the investigating authorities have to be consistently counteracted – also through disciplinary measures.

8. All victims of right-wing violence since 1990 are to be recognized as such in accordance with the list compiled by the Amadeu Antonio Foundation, the newspapers Zeit and Tagesspiegel.

9. The counselling centres for victims of right-wing violence must be preserved, spatially extended, and sponsored.

10. Control committees are to be established on state and federal levels that would function as independent contact points for victims of institutional or individual racism emanating from investigating authorities, or for whistleblowers in such cases. These should be vested with powers of effective control, and should be appointed by parliament.